About a month ago, I decided to go for a bike ride. Since it had been a while, I gave my bike a once over. This included spinning the wheels to see if there was any rubbing or resistance. There was, from the brakes. No problem, I thought. Just adjust the centering. It didn't work. A closer look at the turning wheel revealed a nasty wobble that would always cause brake rub until I learned how to true wheels. So, it was time to learn how to true wheels. I did, and it fixed the rub, but I couldn't stop there.

Last year I moved back home to be on hand for my family. This means I had a handful of old bikes to fix, a long road to drive this fascination along. I've been replacing rim tape, changing tires, lubing joints, degreasing chains and chainrings, taking apart and regreasing hubs, replacing cables and cable housings, cleaning bottom bracket shells and tightening up bottom brackets, and loving every minute of it, even the frustrating ones.

When I tried to do this stuff as a kid, I didn't have the resilience or patience to overcome the challenges of learning how to work on even simple technical systems like those in a bicycle. I wouldn't have been able to handle stripping bolts, crushing handlebars because I got the torque wrong, finding a new problem on my way to fix another.

These things are alright now. Maybe living a bit teaches you that this stuff is alright.

Instant access to YouTube tutorials and common torque specs from any room in the house is a big help too. Didn't have that when I was a kid. Just books. Gross.

In the future, everything from space ships to household lighting will hover. That's what our sci-fi would have us believe, anyway.

Space ships will still need giant thrusters to make them move forward, of course, and cars will still need big engines to make the wheels turn. But to simply overcome the bond between anything with mass and its nearest planet? That's nothing. Why wouldn't a landspeeder be able to soundlessly float a foot off the ground? Why wouldn't a mobile Chinese lunch counter be able to bob there quietly enough for the old cook to offer sage advice to a customer at the window of his 300th floor apartment-pod?

Despite the stereotypical sci-fi fan's habit of pointing out plot holes, inconsistencies, and tired tropes, inexplicable hovering is almost universally treated as a given, a near-necessity in any universe that takes place in the distant future or a galaxy far, far away. 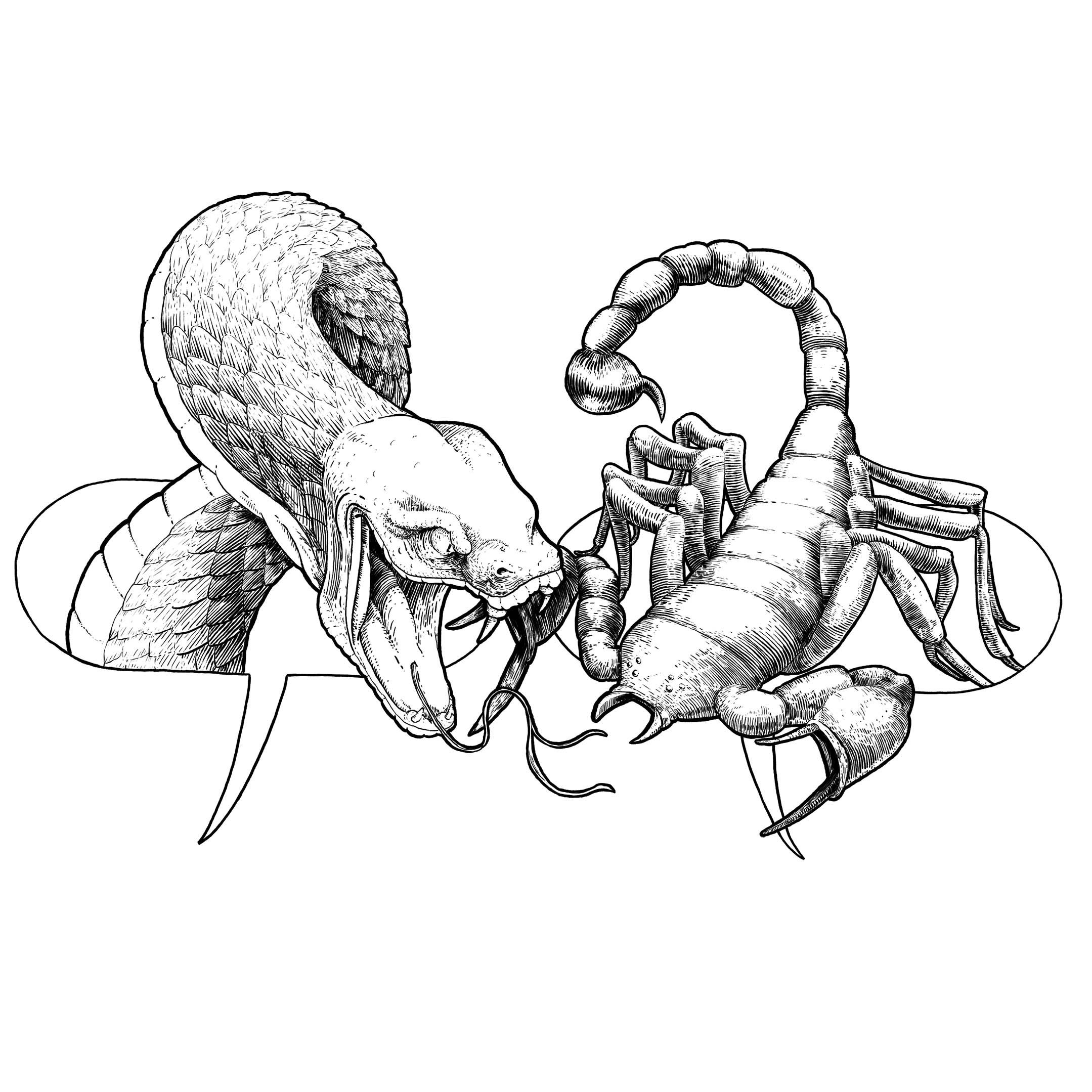 I made the pencil drawing for this a couple of years back. I like to think this digitally inked version has the impact and immediacy that the original seemed to lack. 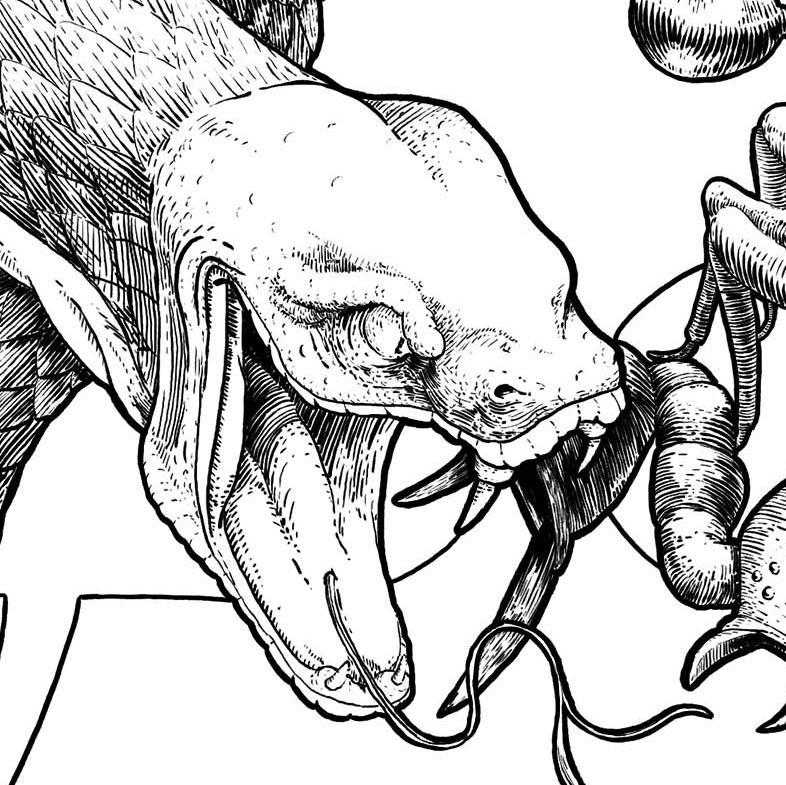 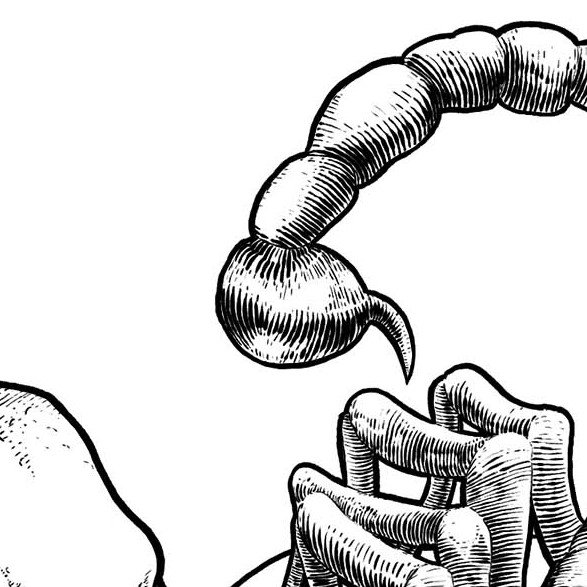 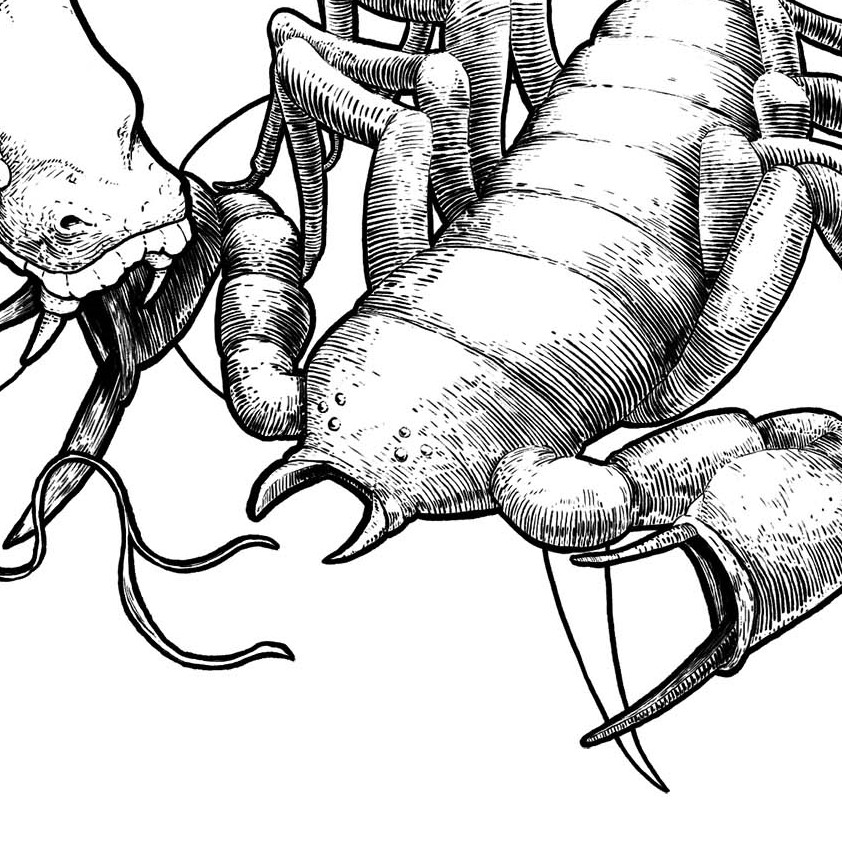 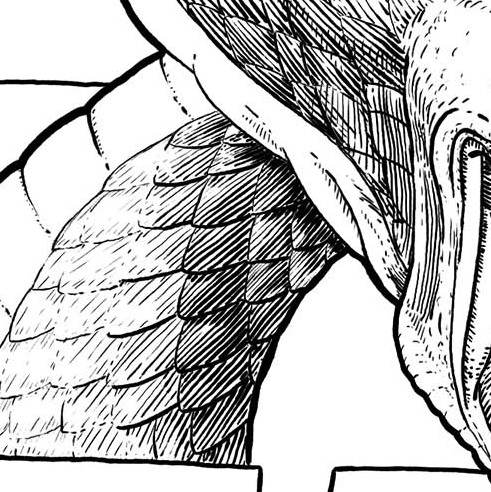 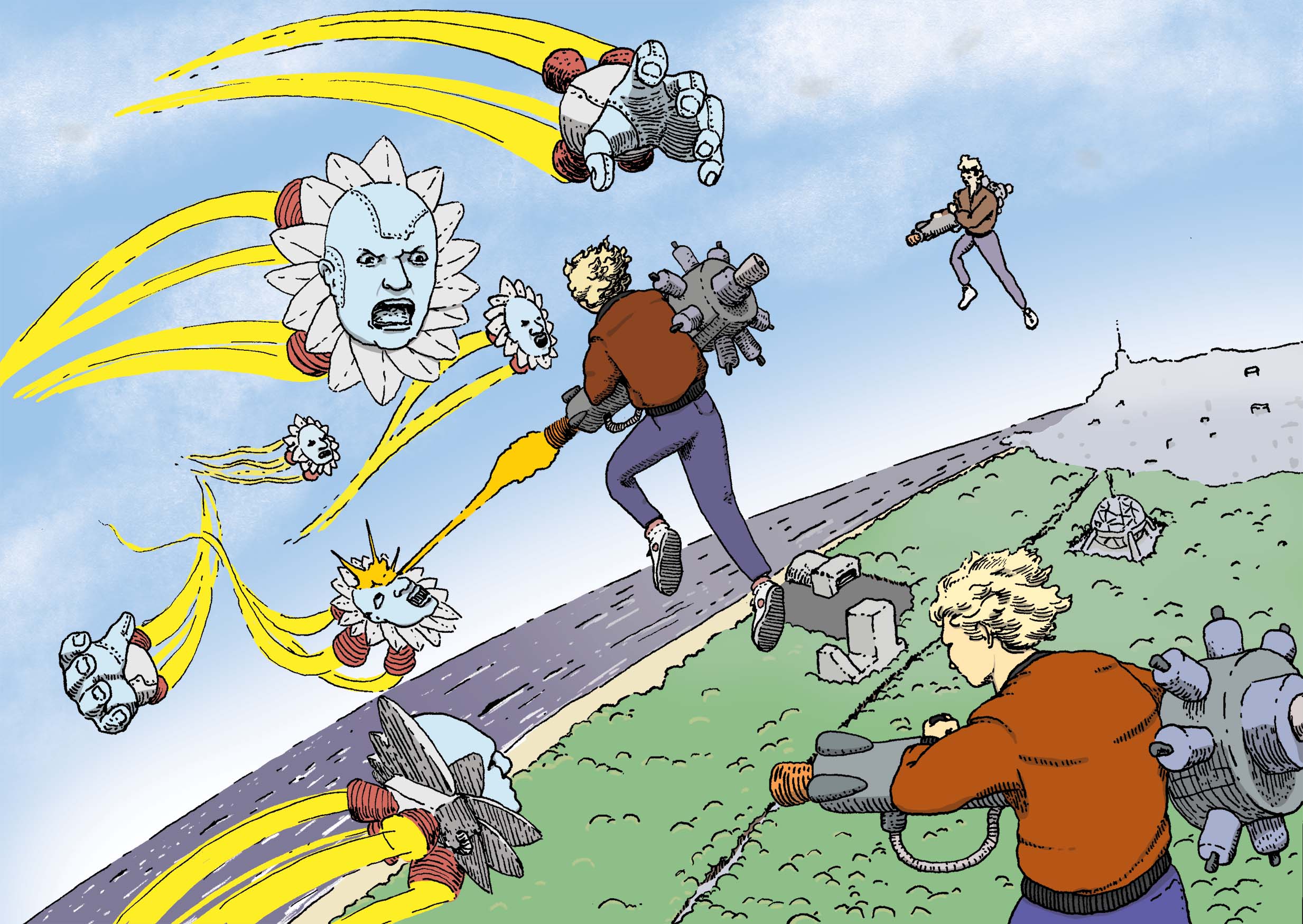 This drawing was inspired by the Sega arcade classic Space Harrier, where you play as a guy with a big gun who can inexplicably fly. Is it the gun that makes you fly? Is it because you're in space? If so, why are there trees? These questions didn't matter in the 80s. 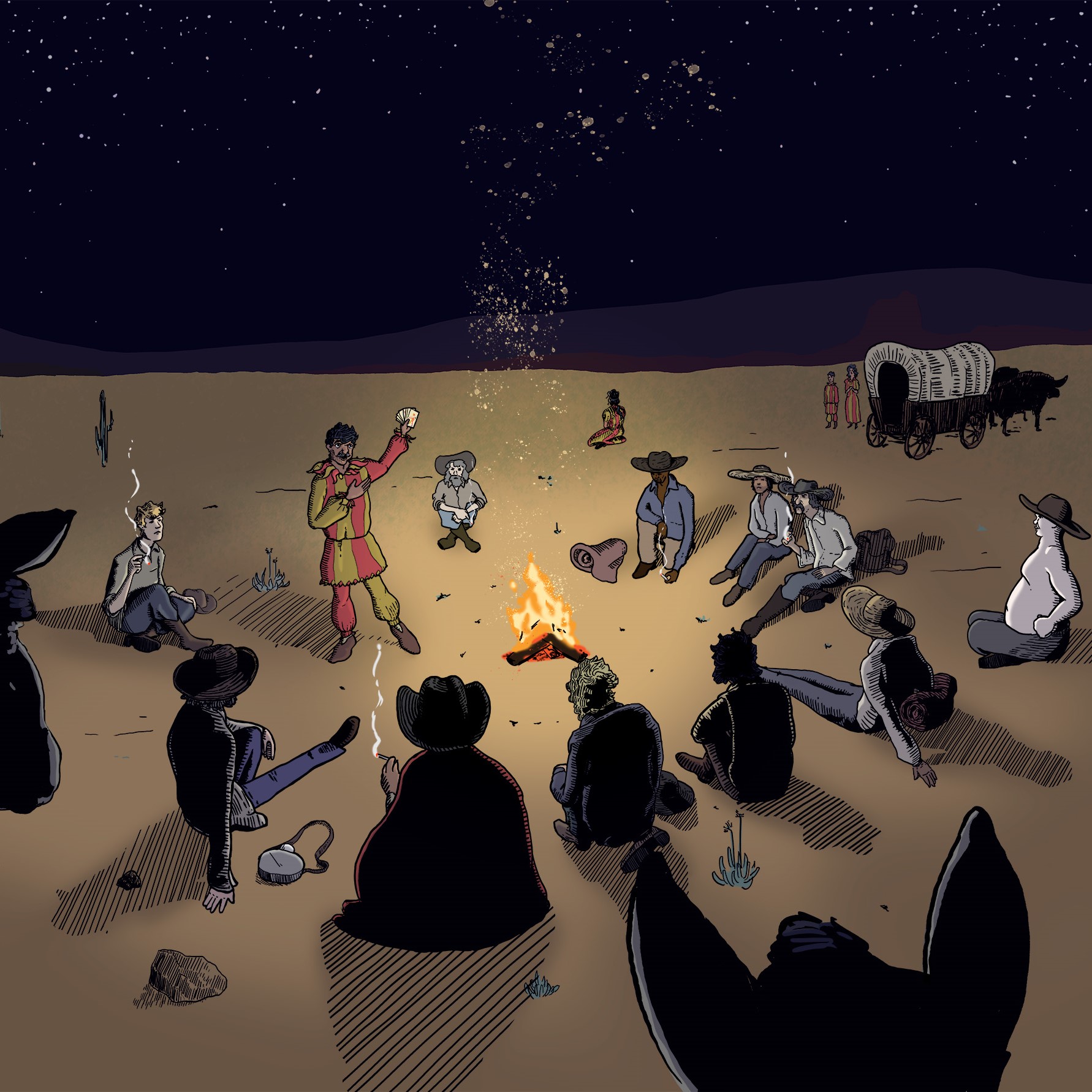 The Malabarista, inspired by Blood Meridian by Cormac McCarthy 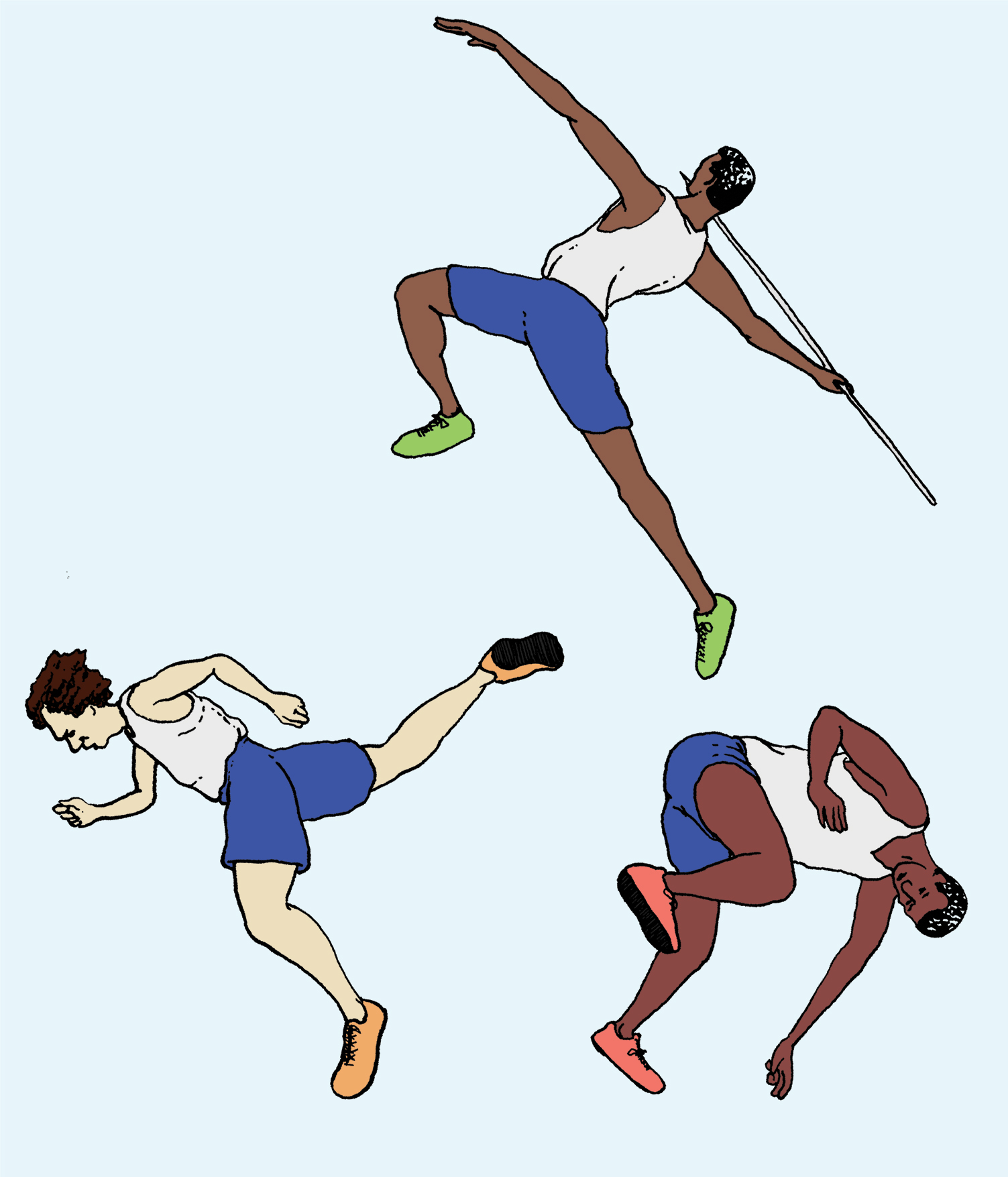 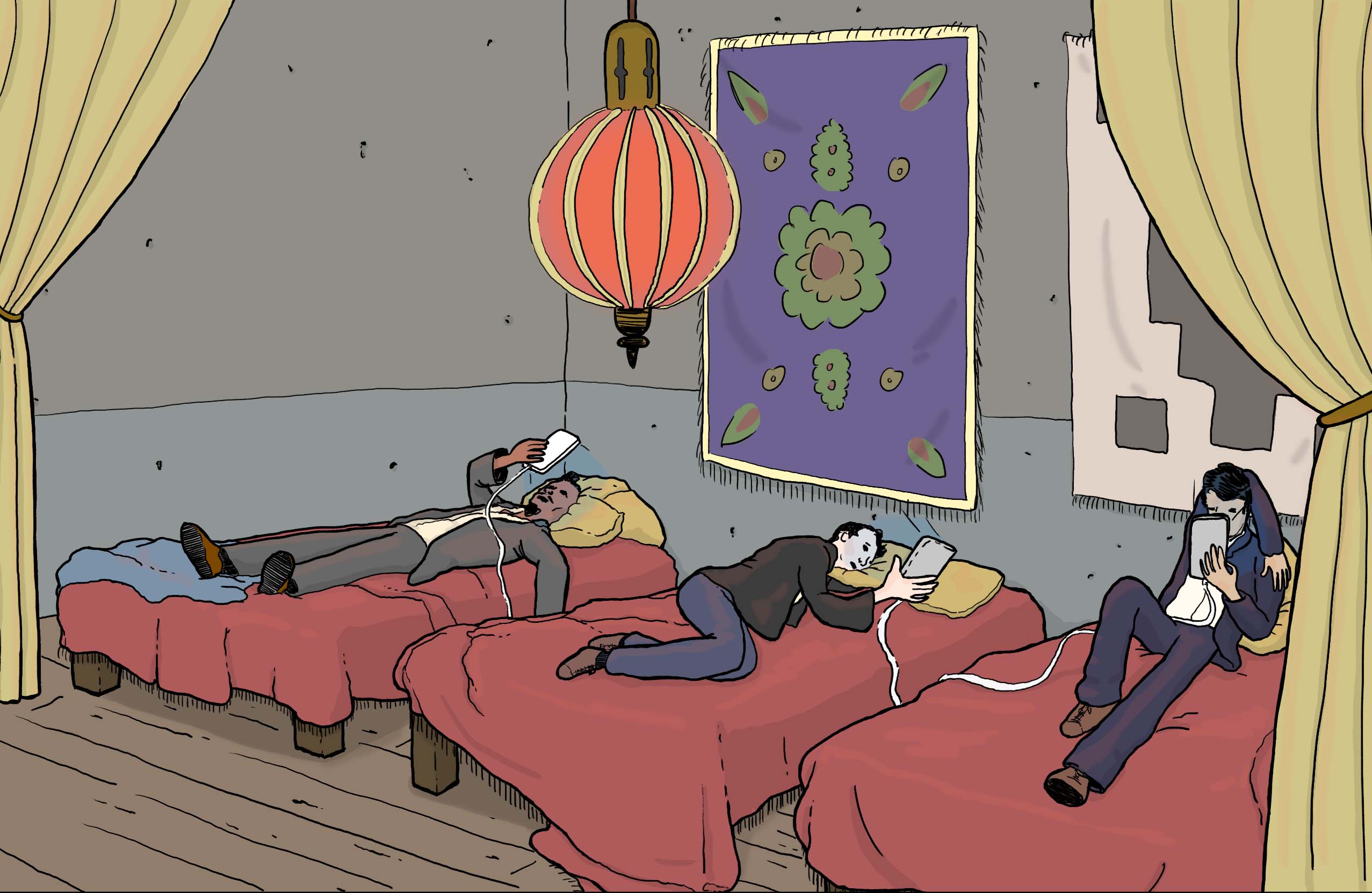 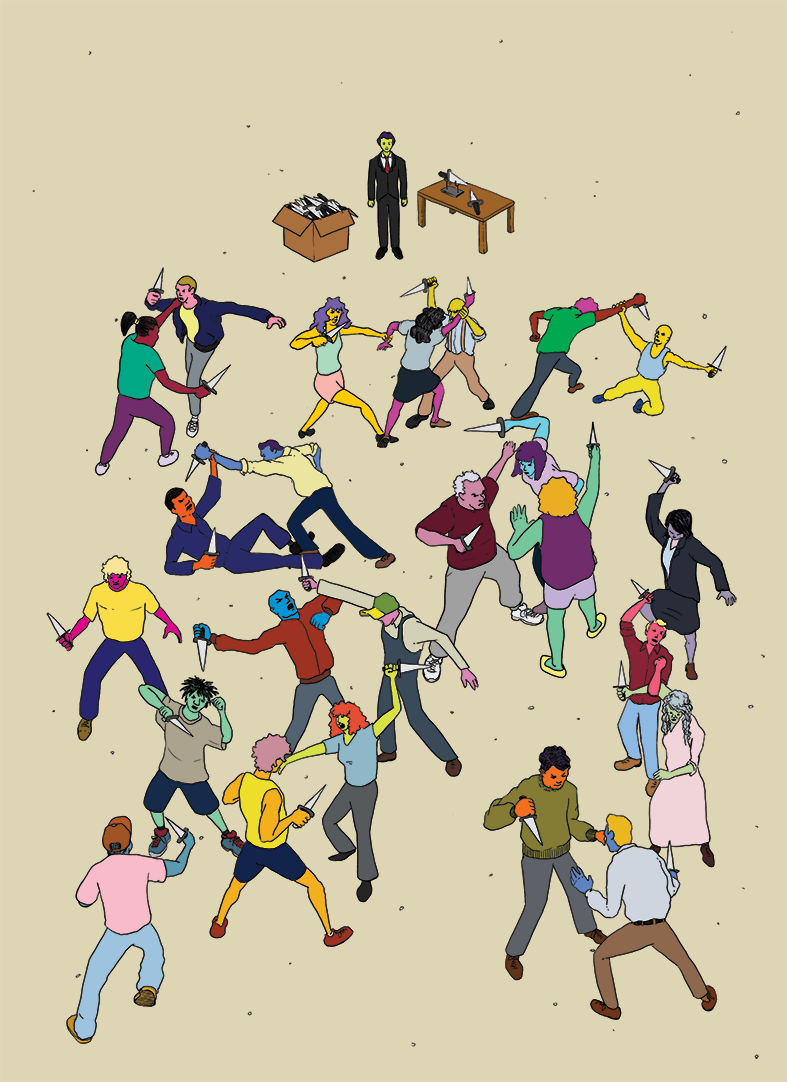 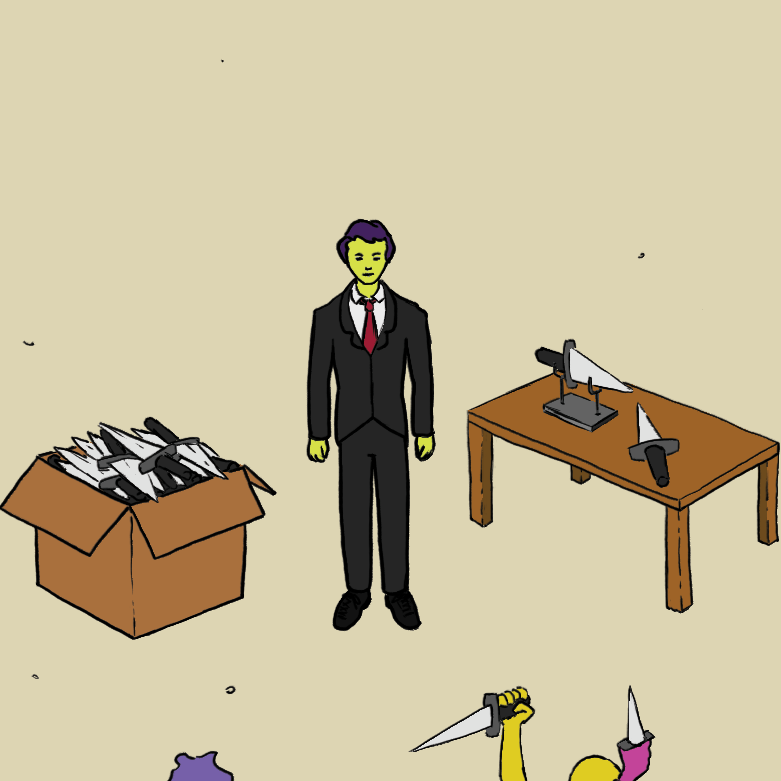 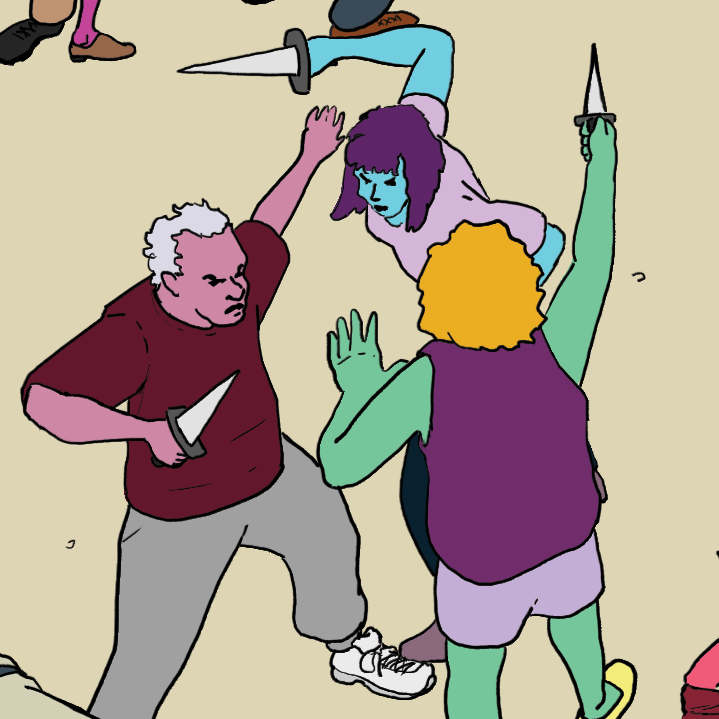 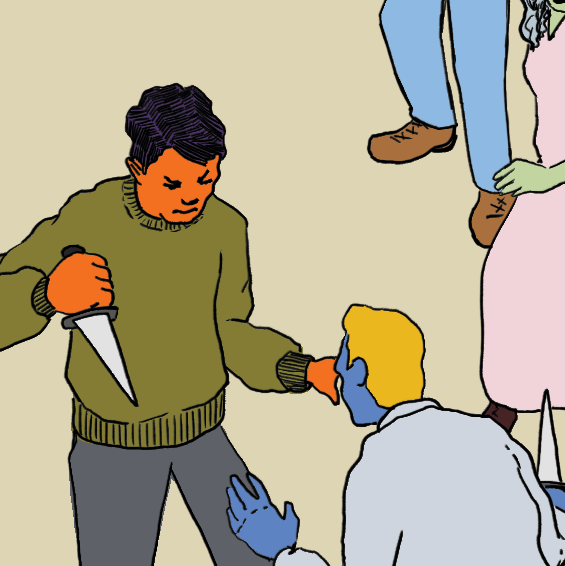 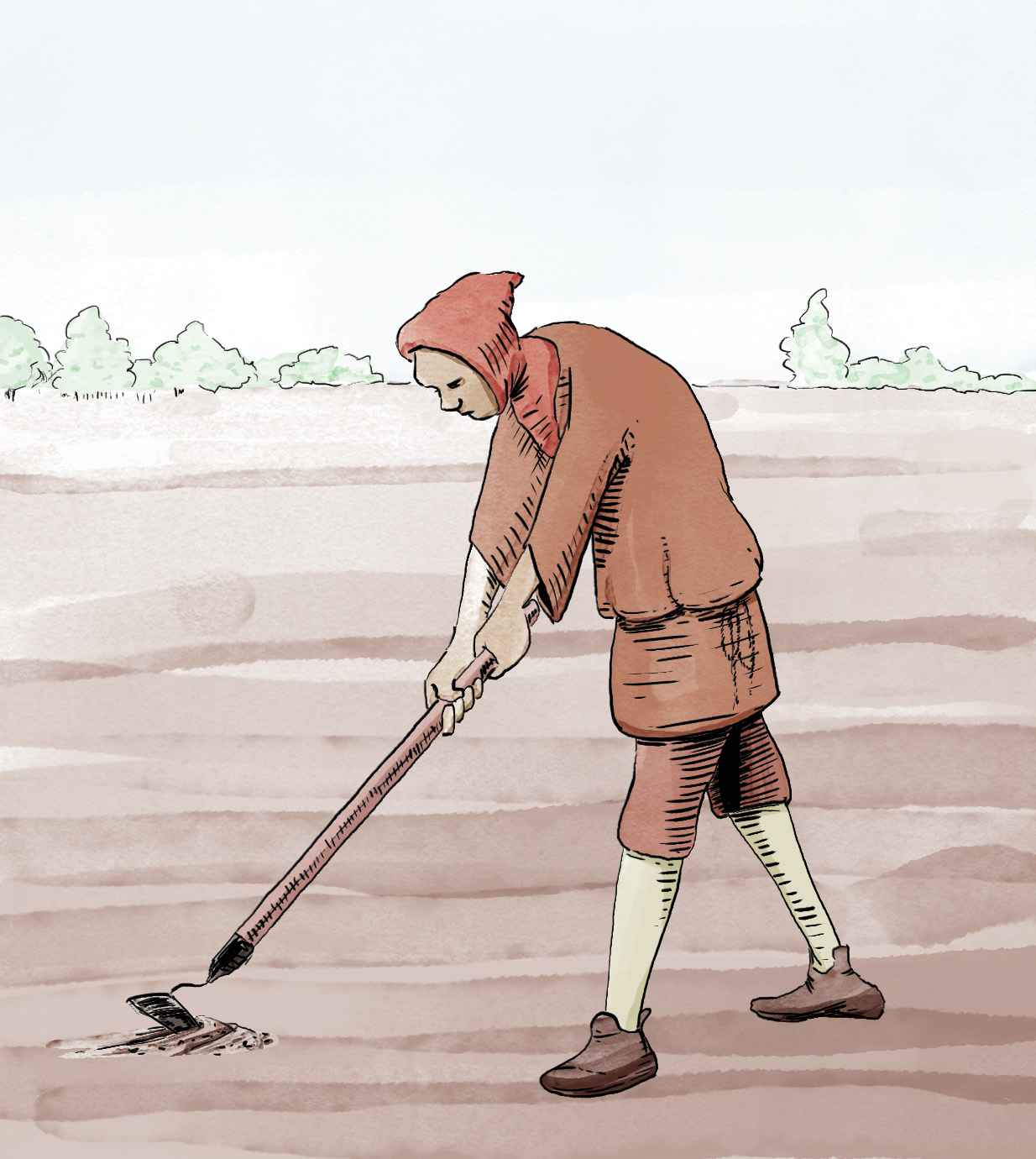 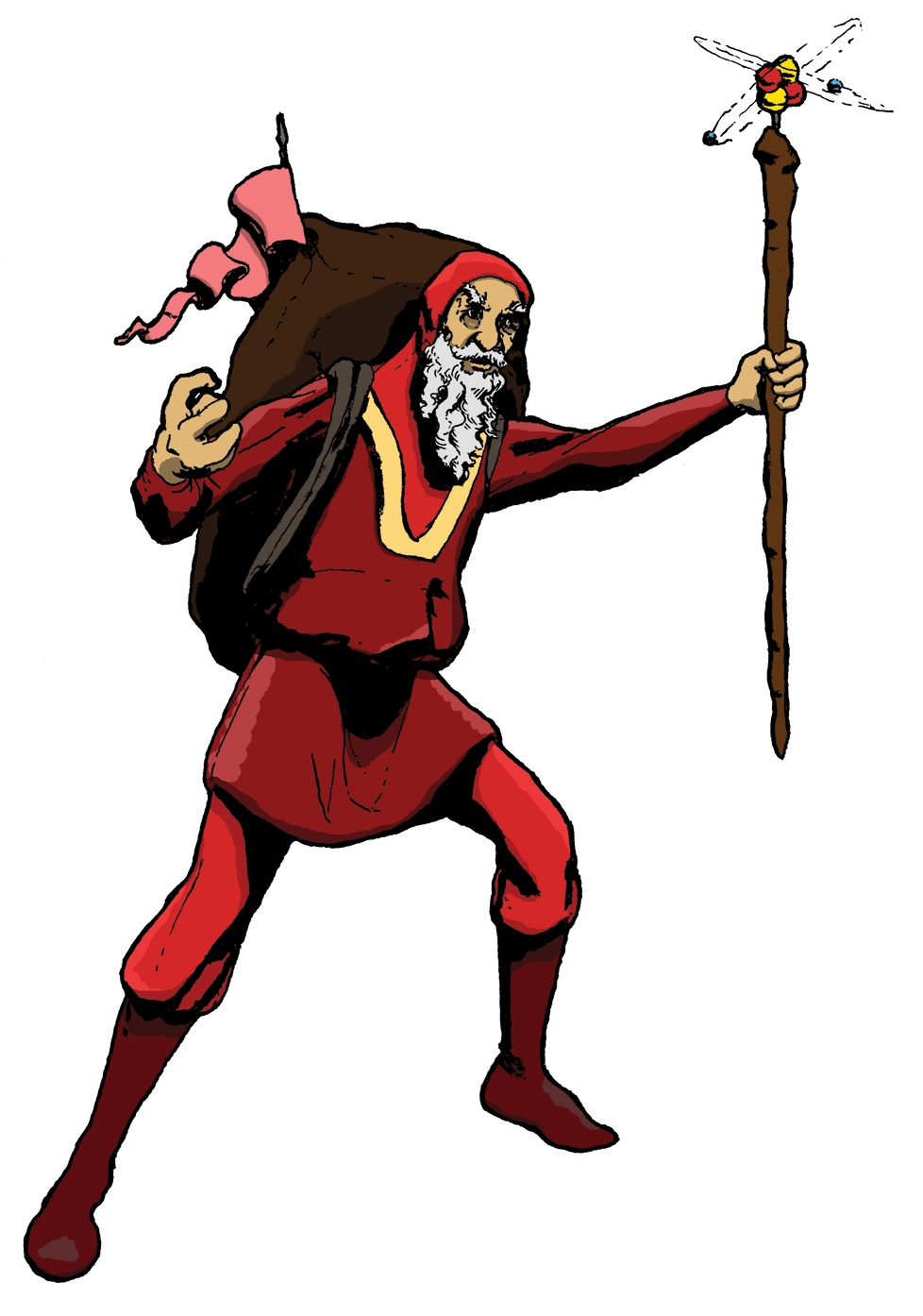 Space proselytizer, Inspired by the priest in Isaac Asimov's Foundation. 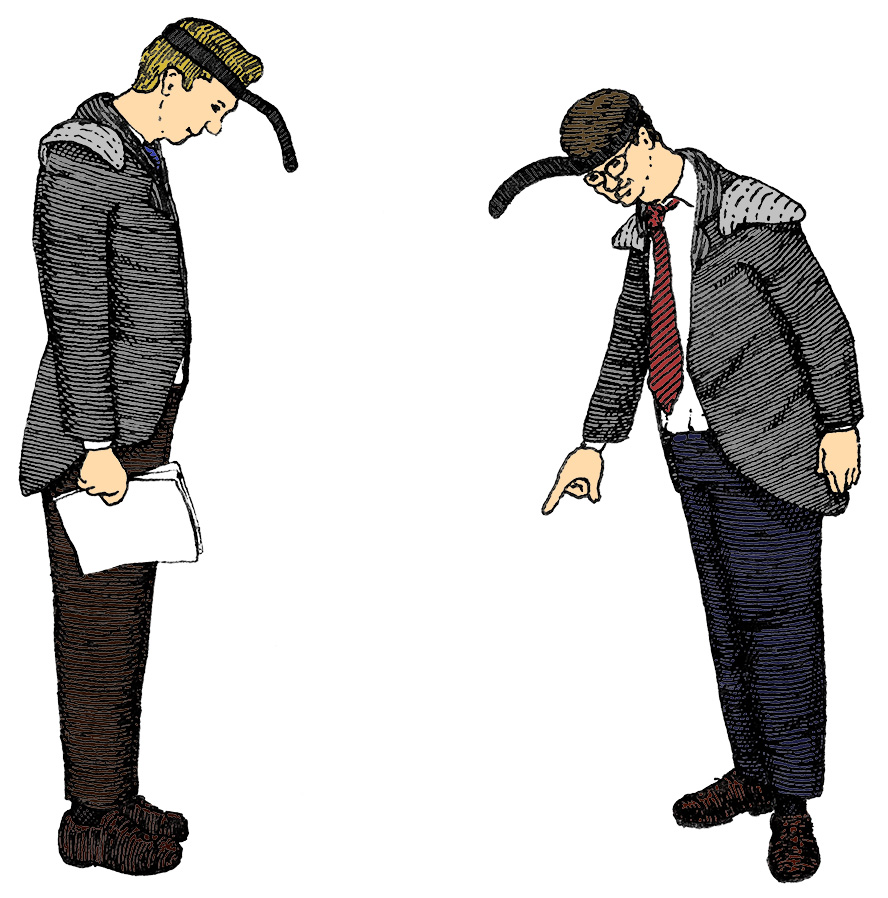 Before the pandemic, I would walk each day to and from my job in an office building. One morning, as I approached it from the sidewalk on the other side of the parking lot, my attention drifted to two conversing figures in one of the office windows. Though they were on the first or second floor, I had to look up a bit to see them, as all of the offices in this building sat above three floors of garage.

Though these men were typical specimens of that environment, unremarkable of build and manner, each wore three strange articles of clothing.

As they spoke, a flexible band of material bobbed in front of each face. It was attached by a belt worn around the head. The bobbing part may have been the excess of the belt itself, left to dangle conspicuously in front of the wearer's face without any loops to secure it. They wore silver-gray suit jackets that didn't seem to go well with their pants. And atop each shoulder sat a pointy shoulder pad that looked like a cheap imitation of something out of an old sci-fi cover.

One of them pointed to a spot on the floor. They both looked as they kept talking.

I didn't ask anybody in the office about this for fear I'd sound crazy. I didn't investigate further for fear I'd learn something that two weirdly dressed office men would prefer I didn't know.

Near my home there's a shopping center with mostly "outlet" versions of designer stores. Interspersed among the Adidas, Aeropostales, Brooks Brothers, are less-premium but equally corporate franchises like "Go! Games and Toys" and the municipal police training center.

This shopping plaza is nearly identical to one that's a state over, owned by the same company, designed apparently by the same architecture firm, and imbued with a soul that was apparently manufactured in the same advertising agencies. The same faces smile above the same clothes in the windows. 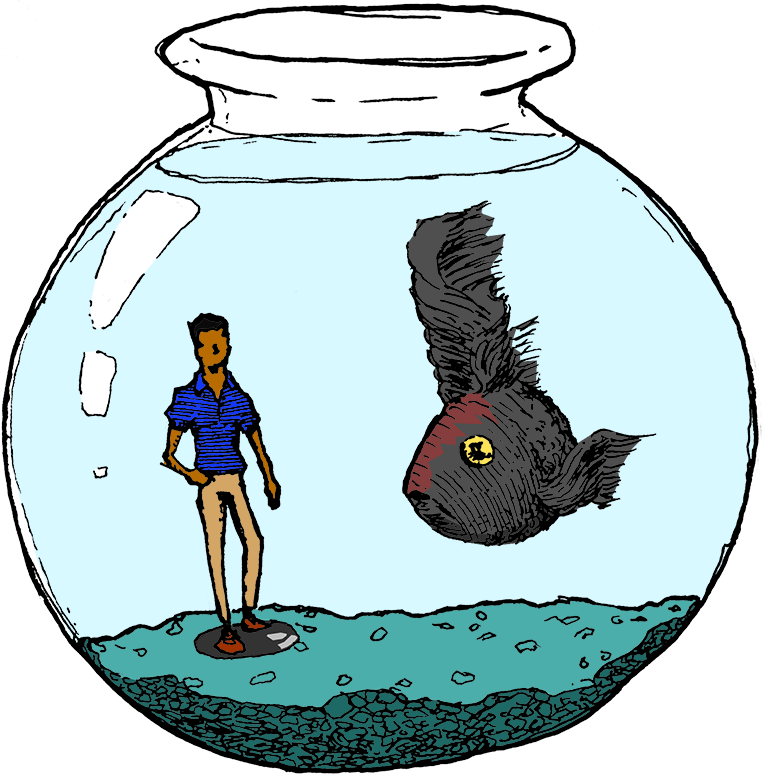 I walk around there sometimes and enjoy myself. I'll buy a coffee from the Starbucks. I'll listen to the muzak and pretend to browse J Crew while I think about nothing. I'll tell the person working there that I'm just browsing when they ask if they can help me find anything. Then I'll start to feel like I may actually want to buy something.

Thank goodness for my Tall coffee. The steam on my glasses and the green mermaid lady logo takes me back to my college days. Now there was a Starbucks that could make a scone. Those were the days.

A tree fell on the fence by the retention pond some time before March 3. 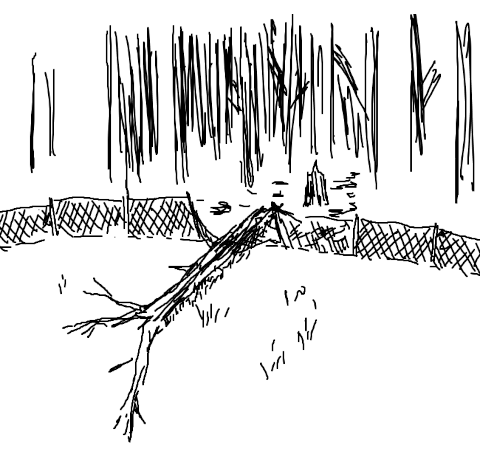 It looked kind of like this, but farther away.

A nearby resident was doing yard work. I didn't ask him about it.

I noticed more litter along the side of the road. Maybe it's because the cold has thinned the foliage that hid it. Maybe there's just more of it. I think I would have noticed the three piss bottles before.

Some of the litter is in people's back yards. Maybe they haven't thought to look back there while it's still too cold to mow.

In the big field of the church on the other side of the road, they set up German Shepherd-shaped cutouts to scare the geese away.

Looking Around at Stuff

Sometimes I go running and sometimes I ride my bike. I like both and take neither seriously.

How you look around at stuff differs depending on whether you're riding or running. When you ride, your eyes dart around, scanning for obstacles, cars, curbs and driveway aprons to pop sick air off of. Everything you see is factored and evaluated. What you really take in is the cumulative experience of all this stuff zipping by.

When you run, you can really look at stuff. You can pick out some thing in the distance, think about some other thing it reminds you of, and then remember you've been staring at a telephone pole for a quarter mile as you pass it. Then on to the next thing, the next series of things.

In the free-to-play Bitburner, you use JavaScript to "hack" simulated servers. It takes place in a terminal-like environment, where you can write scripts. The better your scripts, the higher your score.

The network architecture and techniques are very pared down. For instance, a simple "hack()" command will siphon money out of an unprotected server into your account. This was a good game design choice. By abstracting some complicated tasks with built-in functions, the game encourages you to learn and practice the fundamentals: variables, loops, data structures, modules. It's all in there, and you can use real JavaScript on it.

You have a choice between two scripting languages. Netscript, which is like a simplified version of JavaScript, and NetScript2, which gives you access to all of the basic syntax and vocabulary of JavaScript.

It's a fun, addictive game that can actually turn out to be quite educational. It's important that it's not an educational game that happens to be fun. You don't read up on asynchronous functions because that's the name of some chapter or unit. You do it because you suspect it holds the key to why your script isn't doing what it's supposed to do. This motivates you to learn fast and immediately put things into practice.

My only complaint is that after a while, the scope of your goals seems a bit narrow. Find targets, siphon money, maybe figure out a more clever way to traverse the network. It gets a little monotonous after a while. It would be cool to apply your programming knowledge to a broader range of problems. Sure, you could just "do software development," solve real-world problems, and maybe even build a real-world career, but that's not a video game, so how could it be any fun on a Saturday evening? 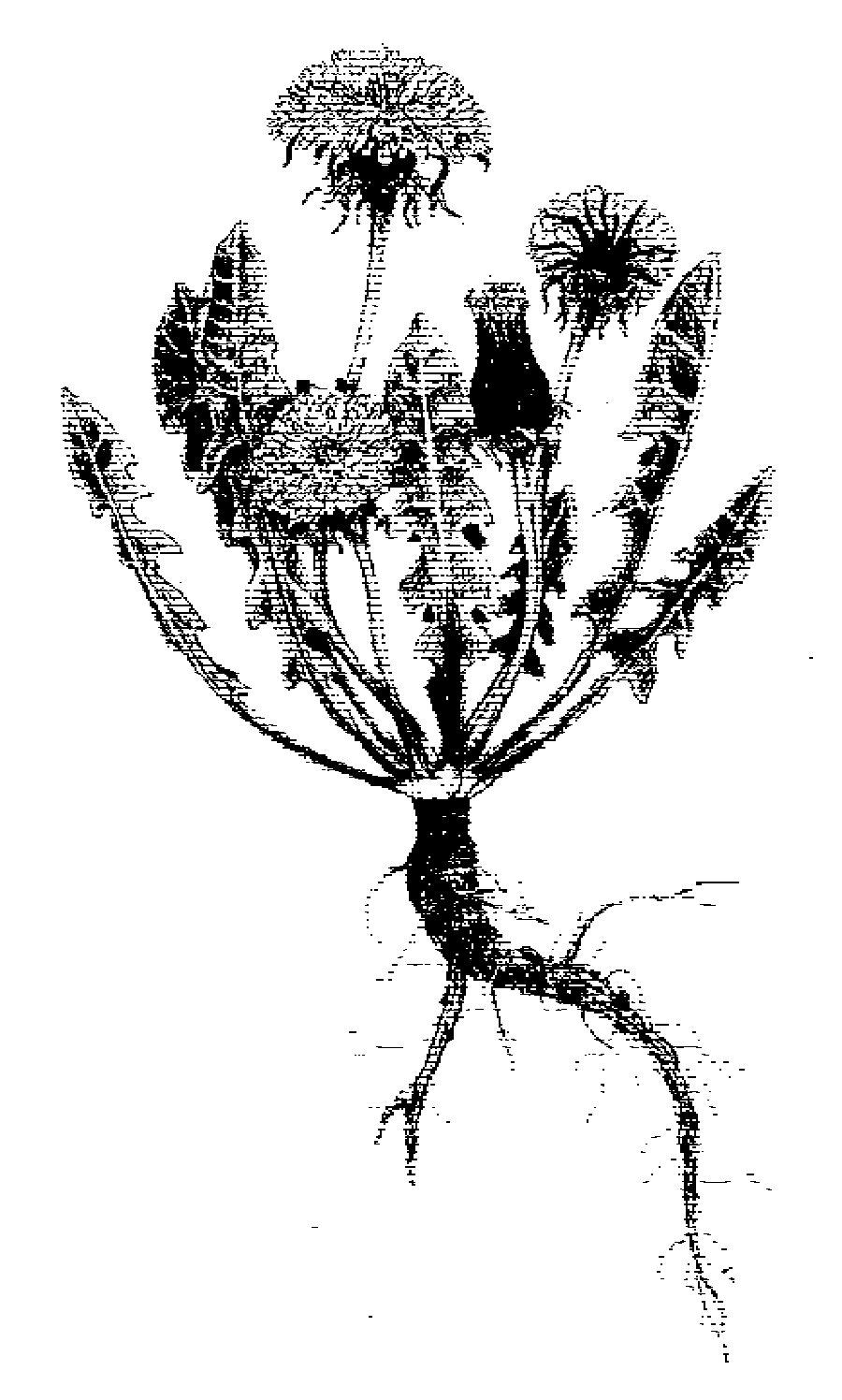 When you try for a realistic drawing or painting of something, you forget about what you’re looking at. When you try for a realistic drawing of a teapot, you don’t actually think about the teapot, or its handle, or its spout, or the hinge that holds the whistle part onto the spout. Instead, you draw what you see. You don’t think about the names that might exist for what you see, or the functions of its parts, or what separates one part from another. The less abstraction through which you send a sight on its way to your hand, the more realism you get, and to practice drawing from life is to reduce noise along this path. You forget about the points of things. You convey the quality of the light across your field of view.

But that’s realism, real realism. Ask anyone to draw a teapot in ten seconds, and they don’t do this. Even somebody who’s been drawing for years will give you a line drawing. Whenever somebody needs to efficiently convey the idea of a thing that can be pictured, they start with a line drawing. It seems to come naturally.

To understand these kinds of drawings also seems to come naturally. Nobody has to be taught that a line represents the boundary between a sudden change in the frequency of light waves from one part of a picture to another. Nobody has to be taught that the line isn’t actually there. Nobody’s ever said, "this is clearly a teapot, but why does it have what appears to be a timing belt along its outer edge?" 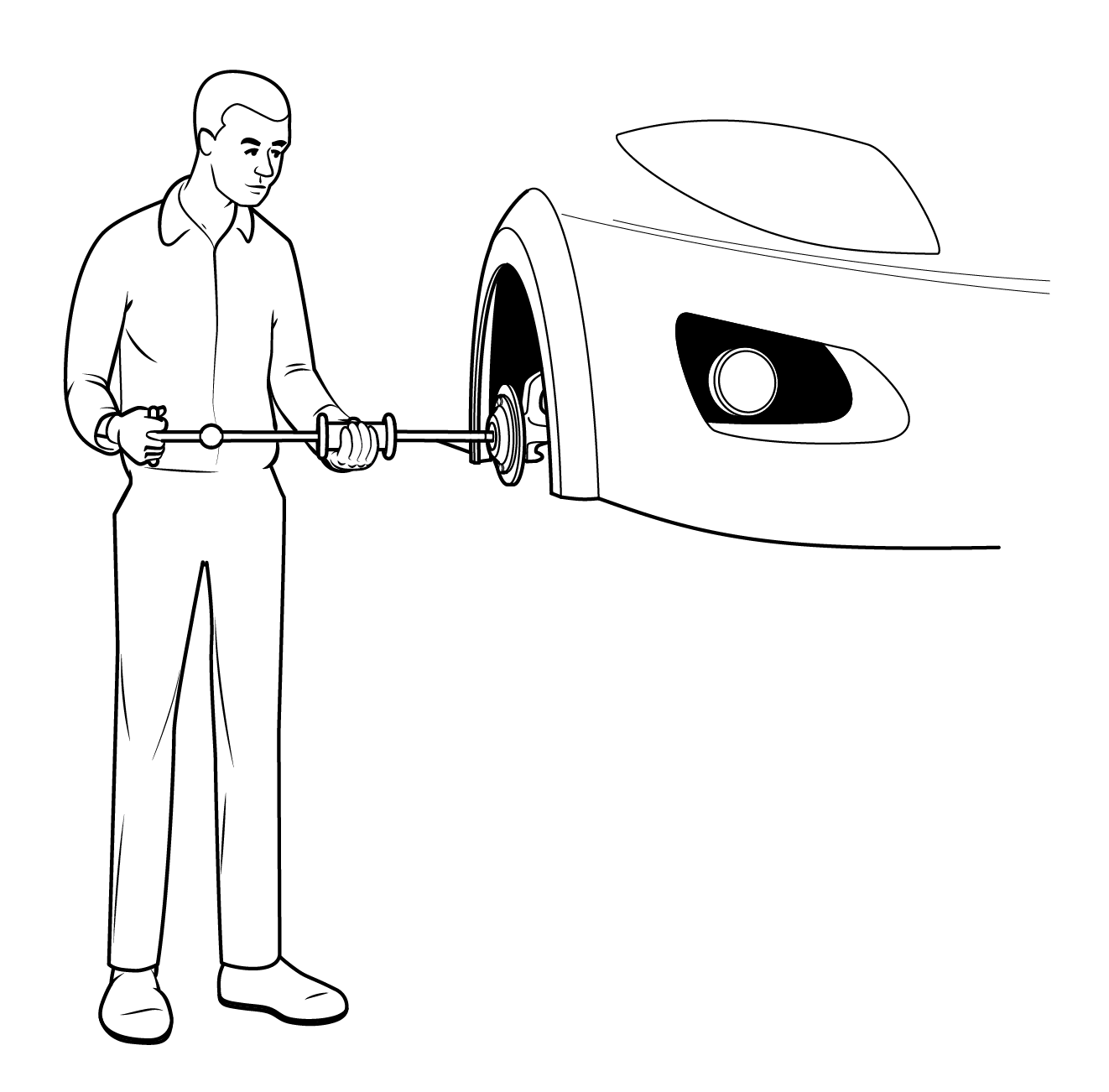 The purpose of technical illustrations like this one is to quickly convey a thing or idea, in this case a slide hammer, which is being used here to remove a hub from a car.

I've been trawling the Wikimedia Commons File Requests page for opportunities to help out with some technical illustrations for pages that could use them. It's been a great way to practice and learn new stuff. Here's a couple I made over the past week. 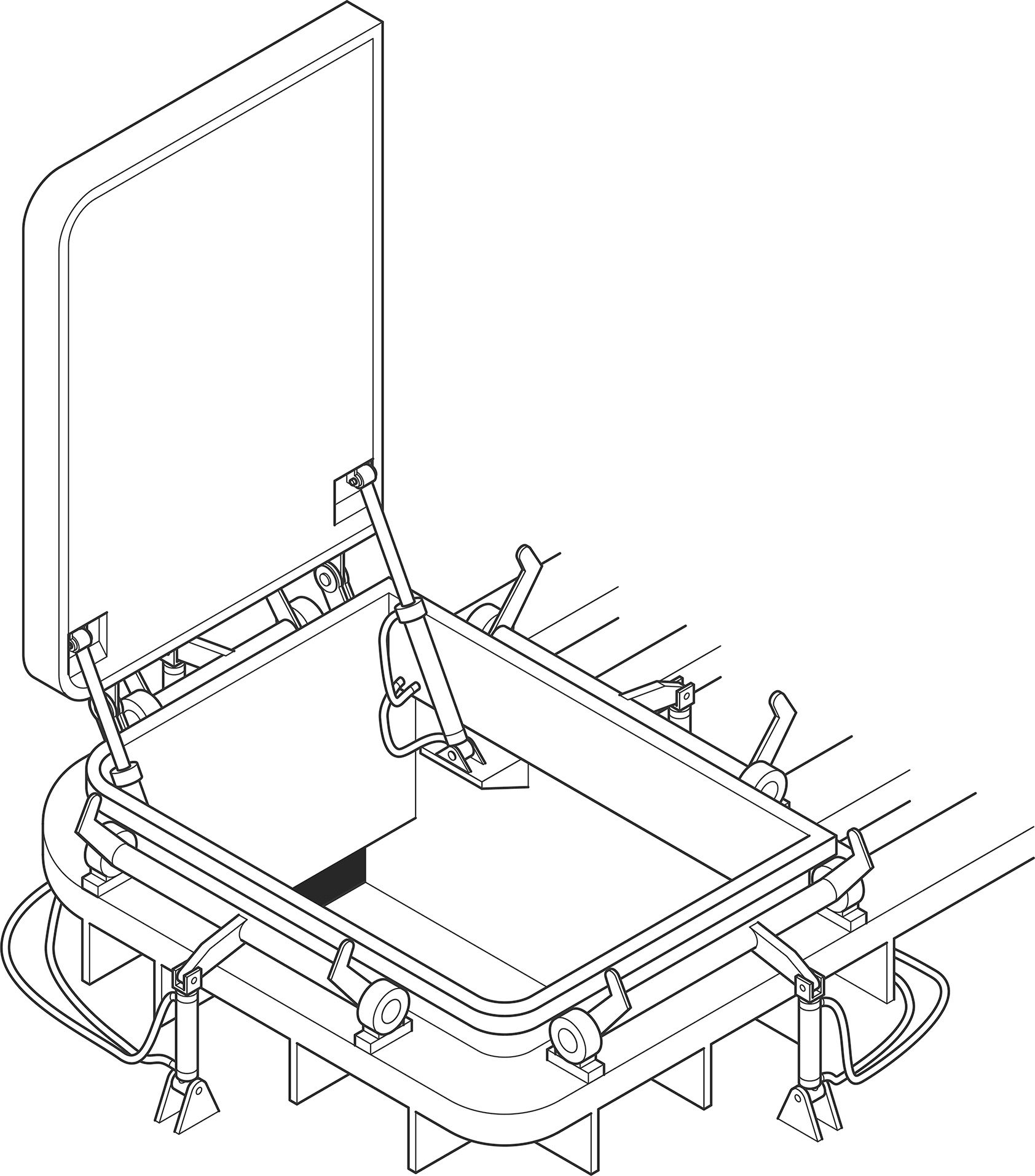 Wellboat hatches like this are common on the decks of big commercial fishing boats that carry live fish. This illustration is included in the Norwegian Wiki article for the MS «Rohav», one such wellboat. A worker on the Rohav was killed in 2018 when a failure in a hatch's hydraulic control system caused the lid to close on him. 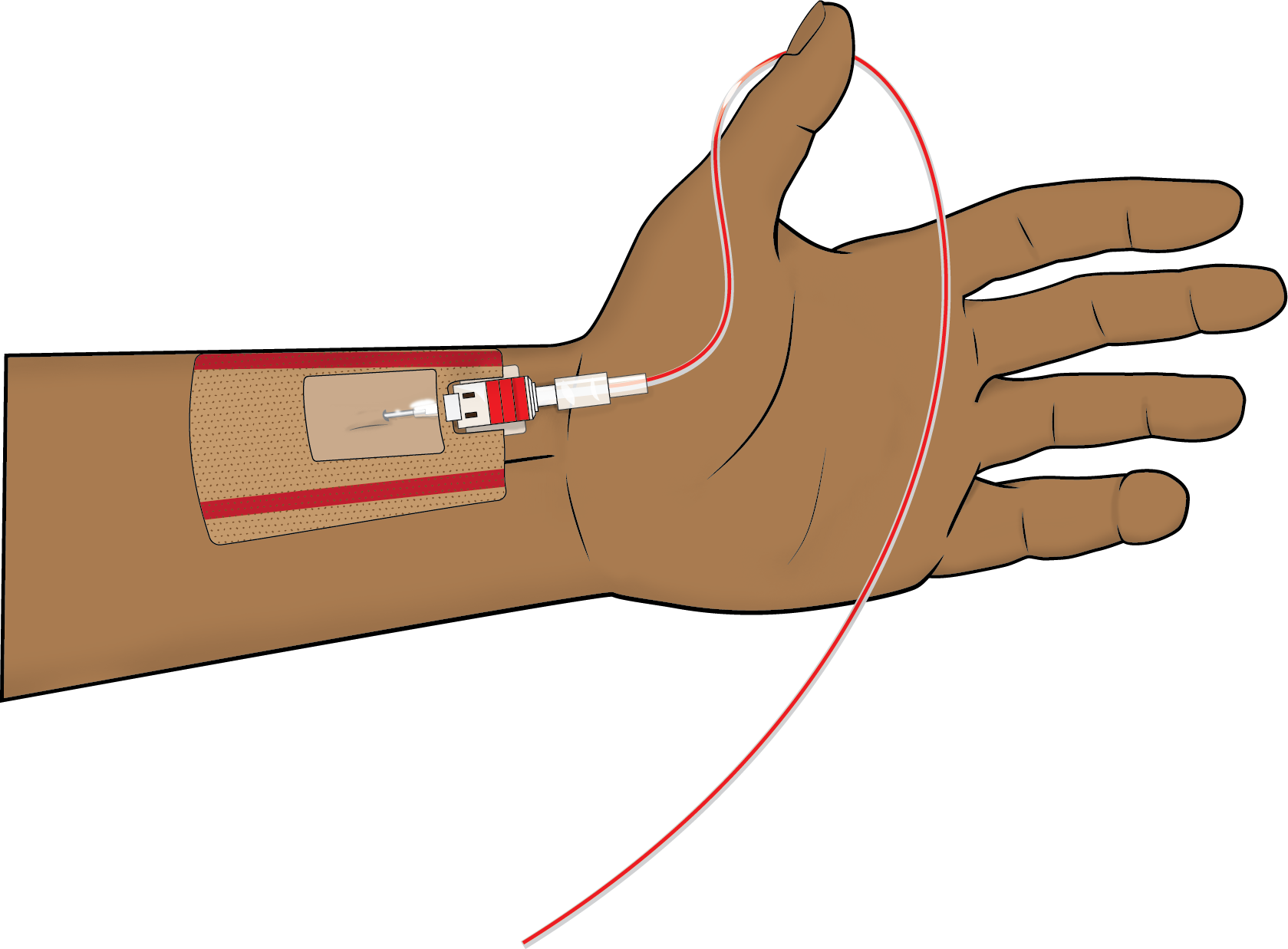 This illustration was made for the Wikipedia article Arterial line, which previously only included pictures of the devices themselves.

2022 Feb. 5 - Added real responsiveness to the navigation links. Changed font throughout to Georgia because apparently Times New Roman is for plebs, which is actually a very good reason to use it. Maybe I'll change it back later. Added this change log.